Launched in December 1892, Rogue is one of the oldest keelboats still going strong in New Zealand.

Rogue represented an intriguing generational shift taking place in Auckland in the Logan and Bailey families. Chas Bailey Jnr was working in his father’s yard by day, and by night use his remaining energies to build Rogue, reputedly by candlelight.

[Rogue] is a slight yacht, with a distinct wineglass shape to her slack bilges, measuring 32 feet LOA, 26 feet LWL, with a beam of 6 feet 8 inches and a draft of 6 feet.

A similar project had just been completed over at the Logan yard, where the Logan brothers, nearing the end of their employment by Robert Logan Snr, built Gloriana. … Gloriana was a tribute to the great American designer, Nathanael Herreshoff. Gloriana was bigger than Rogue, but both were two-and-a-half raters and, in the nature of the rivalry between the two pre-eminent boatbuilding families, their fortunes were to be the subject of intense interest.

In the event, Gloriana quickly established her superiority, and Rogue faded from the racing scene soon after….

In 1901, it was reported that R C Renner had imported her to Wellington and renamed her Muritai.

Under a succession of Wellington owners and with additional ballast on her keel, Muritai fared rather better in competition and was scratch boat in a number of regattas. 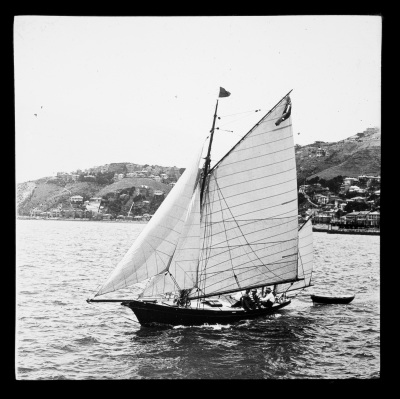 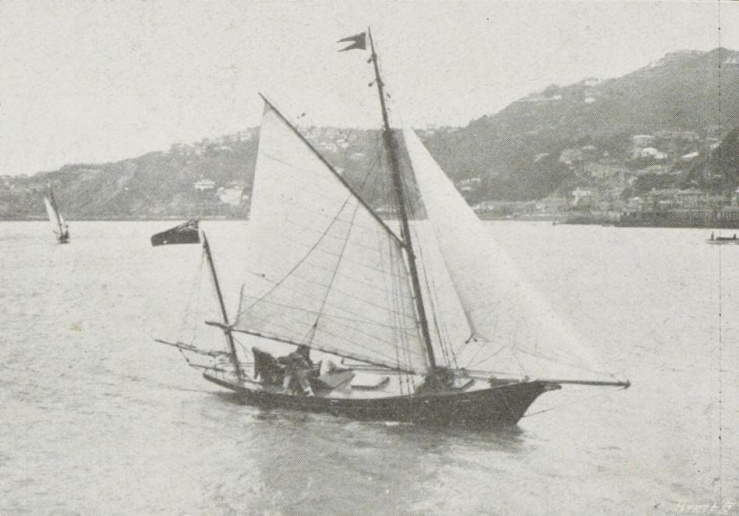 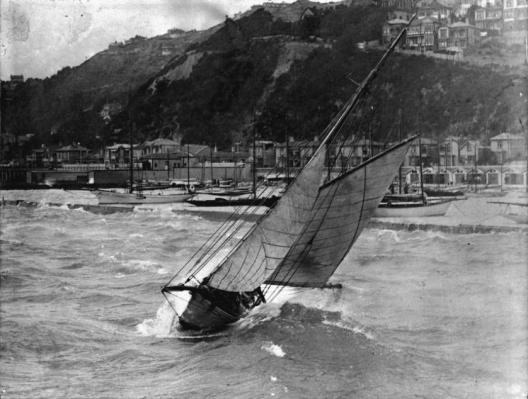 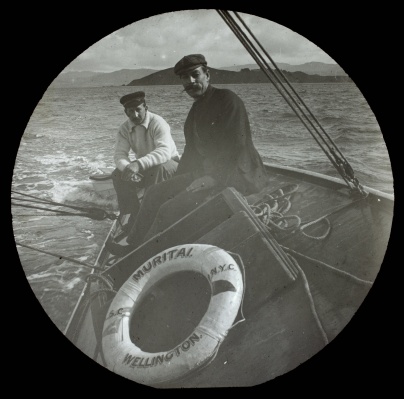 The Rogue saga received major assistance from Wellington designer and boatbuilder Bruce Askew, who is a valuable repository of information about classic yachts.

[Rogue was] subsequently committed to a full professional restoration, which was underway [by 2008] at Matt Price’s airport yard.

This involved stripping the yacht right back to bare wood inside and out, replacing ‘just about everything except for the fabric of the hull itself, which is still good’, according to Price. Some re-engineering was required in the stern counter, where the inner two skins had been removed and shored up with an ill-fitting piece of timber — a precarious arrangement considering it had to support a topmast backstay under the existing Bermudan rig! Price replaced the inner skins and restored the counter and bib. Askew was helpful in searching out original material and providing drawings to keep the restoration as authentic as possible, including a new gaff rig. On completion, she would be as close as possible to how Bailey drew her in the first place (not counting the addition of a discreet engine). 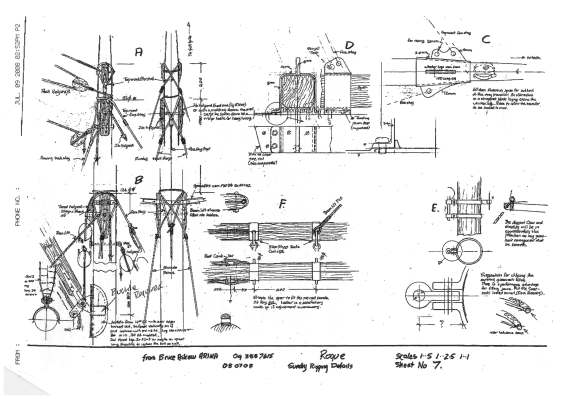 Rogue‘s keel was replaced with an unsightly cast-iron contraption around 1917, when the lead from the original keel was melted down for bullets in support of the war effort. The restoration included a new keel, the replacement of all the floors, which were increased from five to nine to give more support, the installation of a substantial mast step and an entirely new deck, which would replicate the flush design of Bailey’s original concept. ‘The original deck would have been painted canvas,’ said Price. ‘We have gone for a deck of three glued skins, two diagonal and one athwartships, and we will fibreglass the deck. This will stabilise the whole boat.’

Rogue was never a lavish yacht. Built for racing as a young man’s  first solo effort, she was quite plain and the restoration kept faith with that style.

‘I would say your Charles Bailey did a workmanlike job,’ said Price. ‘She was a good result for the effort that went into her. The fact that she has lasted 117 years is proof of that, particularly when you consider that this boat has not been pampered. For much of its life it has either been neglected, or actively abused.’

Given the efforts going into the restoration, it seems Rogue‘s immediate future would reverse that trend.